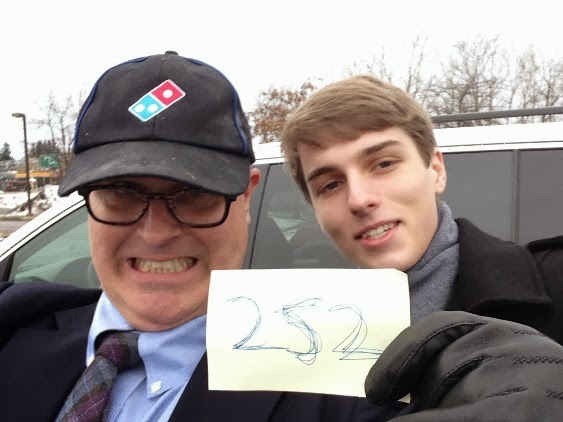 Day 252 / Hat 252: Black, baseball-style cap with red, white and blue embroidered Domino's Pizza logo on front. Graciously loaned to the Project by my nephew Preston McClary ( in the photo with me) who, at the time of the snap was headed to his job at the aforementioned pizza chain.

I had hoped to snare a football helmet to commemorate the big game but figured this was equally appropriate given how much pizza is bound to be consumed today. (Or perhaps even more appropriate given the fact that more people will be eating pizza than playing football.)

I was in Burlington, Vermont, today for my godson Spencer's confirmation (he's Preston's younger brother). The laundry list of novel experiences that today served up --in addition to the confirmation - include: meeting a bishop, watching a man in a Winnie the Pooh costume give a smaller Winne the Pooh doll to an even smaller and freshly baptized baby, and spotting a two-hump camel (that'd be a Bactrian as opposed to a one-humped Dromedary) standing in a semi-frozen field just off Route 7 in Ferrisburg, Vermont.  (Take my word for it: Seeing a camel in an unexpected setting is more off-putting than you might think.)

So a sincere hat-tip to Preston (his second - see link to PC 53 below) for the loan - and a happy Groundhog Day to all. If I had to live one day over and over again (a la Bill Murray in "Groundhog Day") until I got it absolutely right, I could hardly have picked one more entertaining.

Q: OK, nice hat -- but what exactly is Project Cubbins, anyway?
A: One man's homage to Dr. Seuss and his second book, "The 500 Hats of Bartholemew Cubbins," which is celebrating the 75th anniversary of its publication in 2013, Project Cubbins is an attempt to document the wearing of a different hat or piece of headgear every day for 500 consecutive days. No do-aheads, no banking of hats, no retroactive entries. PC started on May 27, 2013 with Hat 1. Got hats? If you loan 'em, you'll get e'm back safe and sound!
Posted by Adam Tschorn at 11:08 AM