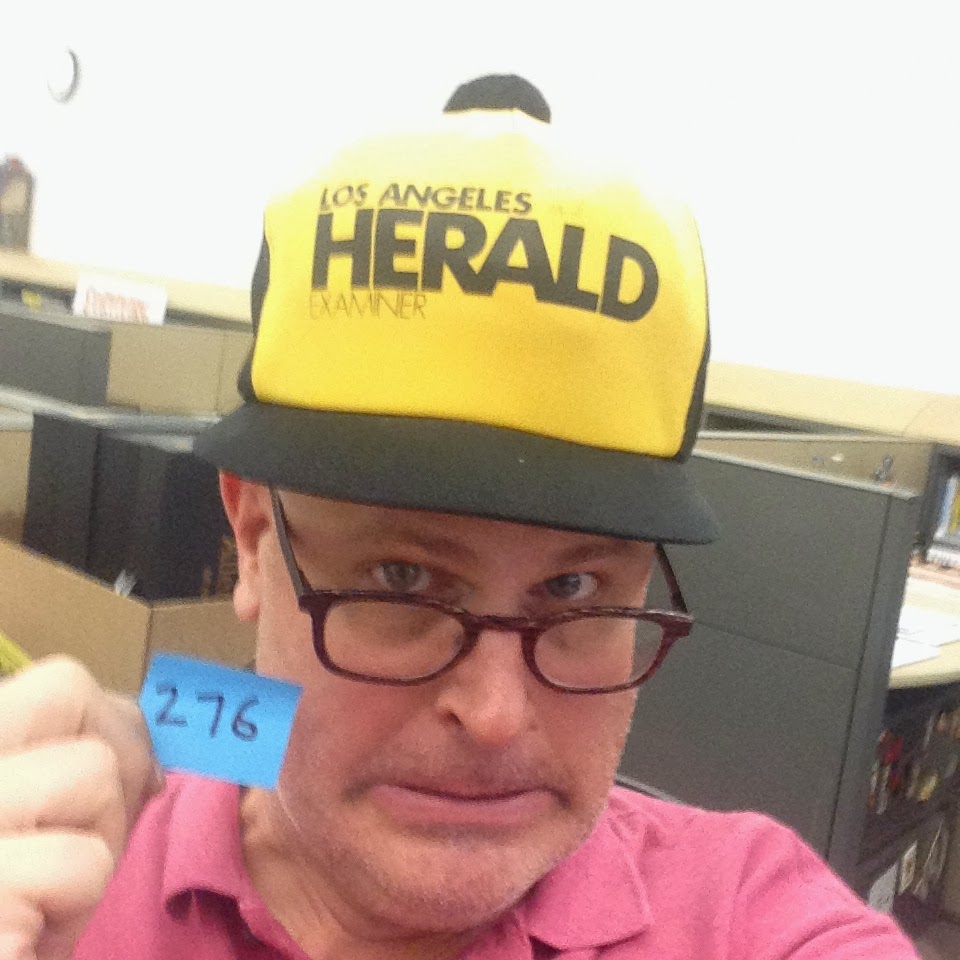 Day 276 / Hat 276: Black and yellow five-panel cap. The back two panels are the kind of mesh you'd find in
the back of a trucker cap, the panels on the left and right side are black (my guess is acrylic or polyester) with yellow contrast stitching and the front double-sized panel is yellow -- printed with the words: "Los Angeles Herald Examiner" in black.

The hat's head-scratching details -- besides wondering what thought process went into (or didn't go into) the design -- include a black fabric pompom up top and a bill that's a perfect semicircle of stingy brimness ranging from 1/2-inch  wide at the temples to 1 3/4-inches wide in the middle.

Another loaner from the Russ Parsons BOH, it's a hat that's been striking a chord with folks in the office as a fair number of them (Parsons included) once worked at the Herald-Examiner, which at one time was the largest afternoon paper in the country.

Wikipedia has a pretty comprehensive entry on the Her-Ex, which was formed in 1962 by the merger of two Hearst-owned papers -- the Los Angeles Examiner and the Los Angeles Herald-Express and published its last edition on November 2, 1989.

In typical L.A. fashion, while the paper is long gone, its building at 1111 South Broadway in downtown L.A. (at the southwest corner of Broadway and 11th streets) lives on as a filming location.

If anyone has the back story on the Her-Ex hat that looks like it was inspired by the Hot Dog on a Stick uniform, drop me a line or post in the comments.

Related:
PC 275: Diplomat Hat
PC 273: Red Rider
Herald-Examiner's last man standing (Los Angeles Times)
Q: OK, nice hat -- but what exactly is Project Cubbins, anyway?
A: One man's homage to Dr. Seuss and his second book, "The 500 Hats of Bartholemew Cubbins," which is celebrating the 75th anniversary of its publication in 2013, Project Cubbins is an attempt to document the wearing of a different hat or piece of headgear every day for 500 consecutive days. No do-aheads, no banking of hats, no retroactive entries. PC started on May 27, 2013 with Hat 1. Got hats? If you loan 'em, you'll get e'm back safe and sound!
Posted by Adam Tschorn at 2:01 PM