Project Cubbins: Hat 159 - Every Dog has Its Day Edition 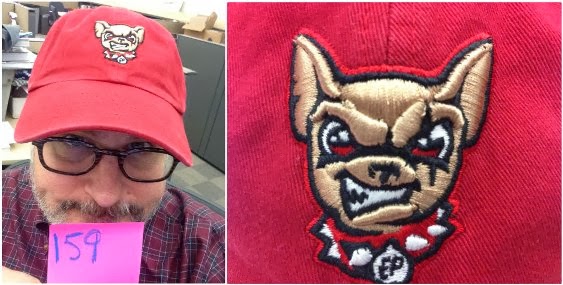 Day 159 / Hat 159: Red cotton baseball-style cap with multi-color embroidery on front that depicts a snarling Chihuahua wearing a red, spiked collar with the letters "EP" on the tag. Additional small white embroidered "'47" on wearer's left of hat just behind the bill (a reference to the manufacturer, Forty Seven Brand).

This hat was one of two recently sent by my father-in-law (aka "the Admiral") who is currently hanging his own hat in El Paso, Texas. It is one of the pieces of team-affiliated merchandise for freshly minted El Paso Chihuahuas Triple-A Baseball team. (Affiliated with the San Diego Padres, the team will start playing in Spring 2014.).

According to the announcement on the team's website, the name and logo were announced just 10 days ago and was the wining entry in a "name the team contest"  submitted by one Shae Vierra. Here are a couple other fun factoids from the site:

--  the team colors are desert red, black, and Chihuahua tan.

-- while the mascot, described as "a scrappy Chihuahua with a spiked collar" is the centerpiece of the team's identity, the family of official logos includes an "EP" with a star, a chewed ball and crossbones (our favorite - so piratical!), and a Chihuahua swinging a bone-shaped bat (an homage to the San Diego Padres' Swingin' Friar mascot).

-- The Chihuahuas logo and graphics were created by San Diego based design firm Brandiose, whose partners are apparently responsible for ginning up some 50 team names and graphics over the years including the Richmond Flying Squirrels the Lehigh Valley Iron Pigs and the Cincinnati Reds.


From what I've found on the interwebs, the choice was originally met with displeasure in some circles for a variety of reasons, but the ball club (which won't be playing its first official game until next spring, mind you) reports that merchandise sales have already been quite brisk in the week following the announcement .

To me that sounds like a team that's already a winner.

A funny aside: Prior to opening the package, I had received a delivery notice via e-mail that simply read: "El Paso Chihuahua hats" -- which I immediately misunderstood to mean tiny-chihuahua-sized hats (pequeños sombreros, maybe). Big man, little hat? You can bet that'll happen before Project Cubbins hits the big 500.

Today's tip of the hat, without doubt, goes to the Admiral. Sir, I salute you.

Related:
PC 158: Masking in the Glory
PC 139: Some Sombrero Edition
It's Time to Embrace the El Paso Chihuahuas, Everybody (Texas Monthly)

A: One man's homage to Dr. Seuss and his second book, "The 500 Hats of Bartholemew Cubbins," which is celebrating the 75th anniversary of its publication in 2013, Project Cubbins is an attempt to document the wearing of a different hat or piece of headgear every day for 500 consecutive days. No do-aheads, no banking of hats, no retroactive entries. PC started on May 27, 2013 with Hat 1.
Got hats? If you loan 'em, you'll get e'm back safe and sound!
Posted by Adam Tschorn at 9:49 AM