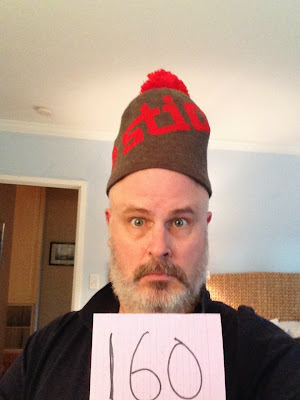 This was a totally rando mystery hat that was left on my desk at work earlier this week with no note of explanation as to the donor or the provenance of said hat -- which still had the manufacturer's hang tag attached (It read Stio, Jackson Hole, WY, Established 2011.)

That was about all the intel I had so I started wearing it around the office every day this week. Finally, about five minutes before I left the office for the weekend, one of my fellow cube farm compatriots, the Travel section's Anne Harnagel, prairie-dogged out of her cubicle and said: "Oh, you got the hat I left on on your desk!"

Oh and here's another mystery solved (in case you were wondering): The hat isn't normally that vertical -- I stuffed a couple pairs of socks in so the design on the side was a little more visible.

So a tip o' the mystery toque to Anne Harnagel!

A: One man's homage to Dr. Seuss and his second book, "The 500 Hats of Bartholemew Cubbins," which is celebrating the 75th anniversary of its publication in 2013, Project Cubbins is an attempt to document the wearing of a different hat or piece of headgear every day for 500 consecutive days. No do-aheads, no banking of hats, no retroactive entries. PC started on May 27, 2013 with Hat 1.
Got hats? If you loan 'em, you'll get e'm back safe and sound!
Posted by Adam Tschorn at 5:43 PM