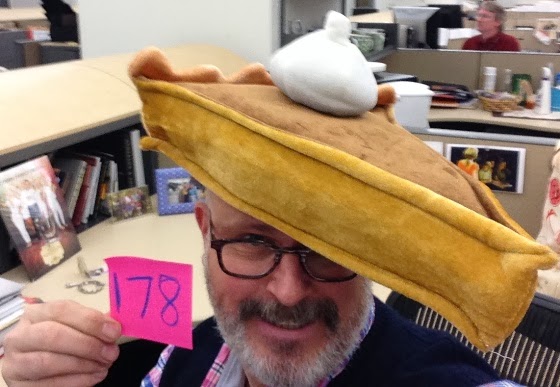 Noelle Carter (she of the NC Series) arrived at the office wearing this lid yesterday and I was INSTANTLY jealous.  I knew I had to make it mine -- if even for a single photo - -so lifted it from her desk first thing this morning. (I don't think she'll mind - she's been very generous with her headgear.)

It reminds me of a Thanksgiving version of the Wisconsin Cheese Head wedge (although Noelle and I agree that the "whipped cream" looks suspiciously like a bulb of garlic).

A: One man's homage to Dr. Seuss and his second book, "The 500 Hats of Bartholemew Cubbins," which is celebrating the 75th anniversary of its publication in 2013, Project Cubbins is an attempt to document the wearing of a different hat or piece of headgear every day for 500 consecutive days. No do-aheads, no banking of hats, no retroactive entries. PC started on May 27, 2013 with Hat 1. Got hats? If you loan 'em, you'll get e'm back safe and sound!