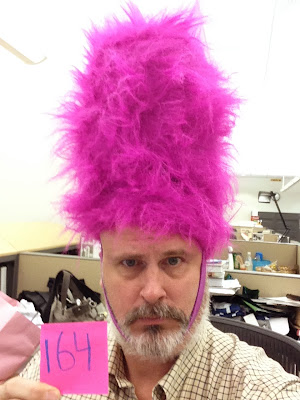 I wanted to call this a beefeater's hat or a a yeoman warder's hat but my cursory explorations indicate I'd be off the mark. The tall (usually black) fur hats we traditionally associate with English ceremonial flourish are traditionally worn by the British Foot Guards.

The Wikipedia entry on the Bearskin is fascinating, by the way, and I shan't bother rehashing it here except to note a theory as to how such a seemingly unworkable high hat came to be part of any military outfit whatsoever:

"The purpose appears to have been to add to the apparent height and impressive appearance of these troops both on the parade ground and the battlefield." notes the entry, citing  Preben Kannil's "Military Uniforms of the World."

As for the instant pink bearskin? I'm guessing it might be standard issue for the Exceedingly Fancy Foot Guards.

And yes, in case you're wondering, like the Stio a few days ago, I stuffed this one to the high heavens. The stuffing? A huge, red clown wig -- which makes things mighty meta for a Wednesday.
Related:
PC 163: Greaser is the Word
PC 162: Gettin' My Geisha On
PC 160: Stuffin' My Stio