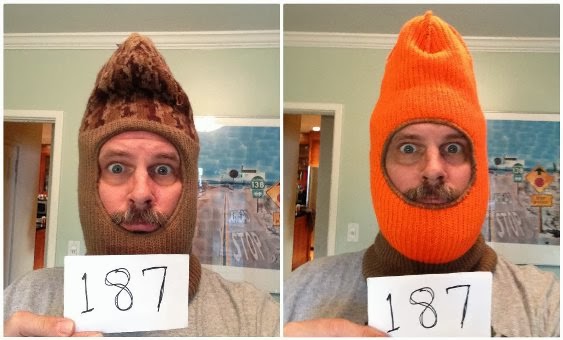 Day 187 / Hat 187: Reversible knit balaclava, one side with solid brown on bottom and camouflage-patterned brown on the top, the other in "County Orange" with band of solid brown at the neck. Interior tag reads: "Outdoor Cap, Made in China, One Size Fits Most," and still-attached price tag reads: "$7.95."

I returned home from a road trip to Sedona to find this fine piece of headgear in a package from my sainted mother Nancy -- along with  small album of photos she'd been asked to pass along by a former flame (mine not hers). The enclosed note reads, in part:

"Camo side for turkey and archery hunting -

Pull over face if it's cold --

Roll up if it's warm.

Couldn't send a pkg without a hat!"

You may not be aware of it, but this protective garment came to be known as a balaclava because of its use in the 1854 Battle of Balaclava -- which not only included the infamous cavalry charge immortalized by Alfred Lord Tennyson's poem "The Charge of the Light Brigade," but also helped cement the cardigan sweater and the raglan sleeve in the world's wardrobe. (I learned this  from a book called " The Reason Why: The Story of the Fatal Charge of the Light Brigade" by Cecil Woodham-Smith (Constable, 1953), which I discuss here.)

According to Richard Rutt's "A History of Handknitting," in the 19th century what we sometimes call a ski mask was also known as a Uhlan cap or Templar cap.

Oh, and if you find yourself in the lower parts of the 802 and in need of one of these bad boys, Doug and Nancy will take care of you right good at the Wayside Country Store!

A: One man's homage to Dr. Seuss and his second book, "The 500 Hats of Bartholemew Cubbins," which is celebrating the 75th anniversary of its publication in 2013, Project Cubbins is an attempt to document the wearing of a different hat or piece of headgear every day for 500 consecutive days. No do-aheads, no banking of hats, no retroactive entries. PC started on May 27, 2013 with Hat 1.
Got hats? If you loan 'em, you'll get e'm back safe and sound!
Posted by Adam Tschorn at 3:56 PM