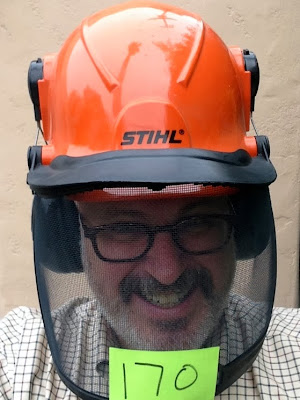 If you thought this came to courtesy of the family business -- the combination chainsaw sales and service / furniture refinishing / gas station back in the 802 -- you'd be thinking wrong.

This awesome piece of protective headgear was a gift to me from one Donald John -- father of one of my dearest friends Heather Fogarty. He had one like it kicking around the house up in the Napa Valley which, during a visit quite a few years ago (and greased by more than few libations) I decided to don for a photograph or two.

A few months later, Heather (aka "G") presented me with my very own, brand-new, still-in-the-box  forestry system.

I was actually thinking about sporting this hat yesterday -- being Heather's birthday and all -- before going with a nod to Veterans Day.

So today's tip o' the hat goes to G, with a special full doffing of said helmet to Mr. John for this awesome headgear which, to this day, occupies a place of honor in the Garlodge.


OK, nice hat -- but what exactly is Project Cubbins, anyway?
A: One man's homage to Dr. Seuss and his second book, "The 500 Hats of Bartholemew Cubbins," which is celebrating the 75th anniversary of its publication in 2013, Project Cubbins is an attempt to document the wearing of a different hat or piece of headgear every day for 500 consecutive days. No do-aheads, no banking of hats, no retroactive entries. PC started on May 27, 2013 with Hat 1.