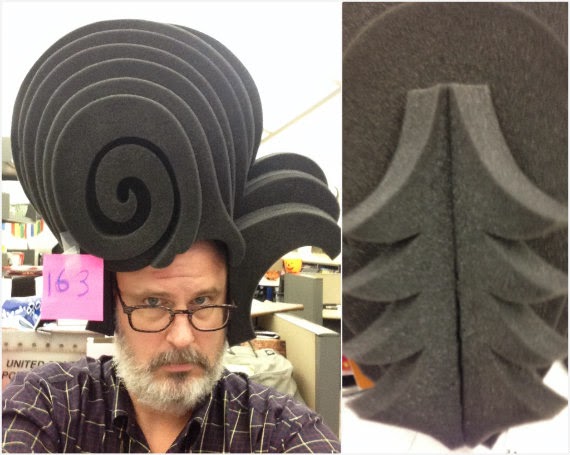 As mentioned in previous posts, this is the last of the Target Halloween hat-trick so I don't really have much to add -- except that the one thing you can't see from the front is the foam D.A. detail sculpted into the back.

What's a D.A., you ask? That'd be duck's ass aka duck's tail, a tonsorial flourish popular in the '50s  in which the greased hair of the noncomformist youth is swept back toward the nape of the neck and styled to effect a look not unlike that of the business end of anas platyrhynchos.

At a full nine inches long -- and crafted out of foam -- in isolation (as in the photo above right) it kind of looks more like the beginning of a craft-project Christmas tree than a calling card of disenfranchised youth, but I appreciate the effort nonetheless.


OK, nice hat -- but what exactly is Project Cubbins, anyway?
A: One man's homage to Dr. Seuss and his second book, "The 500 Hats of Bartholemew Cubbins," which is celebrating the 75th anniversary of its publication in 2013, Project Cubbins is an attempt to document the wearing of a different hat or piece of headgear every day for 500 consecutive days. No do-aheads, no banking of hats, no retroactive entries. PC started on May 27, 2013 with Hat 1. Got hats? If you loan 'em, you'll get e'm back safe and sound!
Posted by Adam Tschorn at 8:33 AM