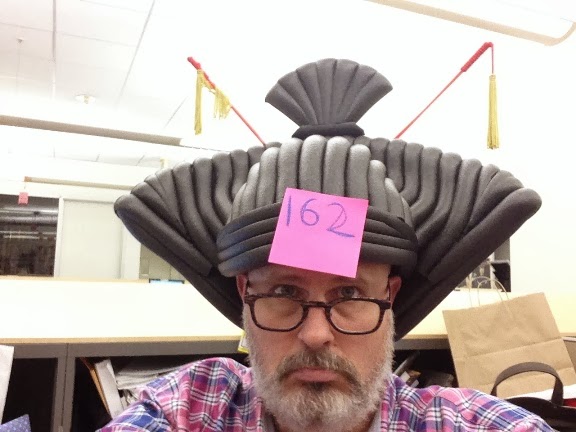 Day 162 / Hat 162: Foam plastic geisha-style headdress from the Chris March Big Fun exclusive to Target collection. ( would include a link but they appear to no longer be listed online.)

This is the second of three pieces of Halloween headgear that showed up on my desk last week (the first was showcased in installment #156 "Snakes on the Brain") thanks to the lid-wrangling skills of Ingrid Schmidt.

Look for the last lid in the Target hat-trick soon.

OK, nice hat -- but what exactly is Project Cubbins, anyway?
A: One man's homage to Dr. Seuss and his second book, "The 500 Hats of Bartholemew Cubbins," which is celebrating the 75th anniversary of its publication in 2013, Project Cubbins is an attempt to document the wearing of a different hat or piece of headgear every day for 500 consecutive days. No do-aheads, no banking of hats, no retroactive entries. PC started on May 27, 2013 with Hat 1. Got hats? If you loan 'em, you'll get e'm back safe and sound!
Posted by Adam Tschorn at 3:33 PM