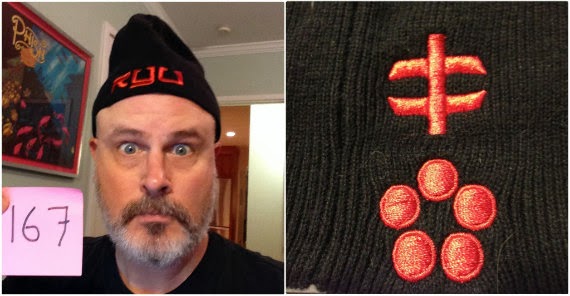 Day 167 / Hat 167 - Black, 100% cotton knit cap. with red embroidery that reads: "RYU" on one side and additional red embroidered design that I can't make heads or tails out of on the other side (see detail photo above left). Interior tag reads: "Made in China."

Haven't the faintest clue where this hat originally came from, but I unearthed it today while cleaning my closets (the wardrobe equivalent of the Augean Stables, it seems like sometimes).

You probably think you've seen me wear this hat in the series before. I should point out you have seen me wear several black knit caps, but this one is not a repeat. (or should I say "Ryu-peat"?)

OK, nice hat -- but what exactly is Project Cubbins, anyway?
A: One man's homage to Dr. Seuss and his second book, "The 500 Hats of Bartholemew Cubbins," which is celebrating the 75th anniversary of its publication in 2013, Project Cubbins is an attempt to document the wearing of a different hat or piece of headgear every day for 500 consecutive days. No do-aheads, no banking of hats, no retroactive entries. PC started on May 27, 2013 with Hat 1. Got hats? If you loan 'em, you'll get e'm back safe and sound!
Posted by Adam Tschorn at 5:25 PM