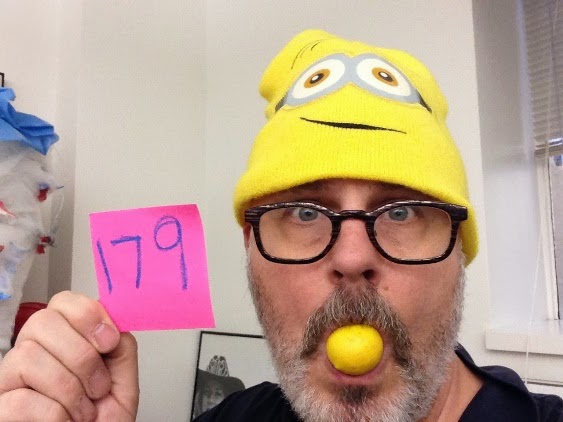 Day 179 / Hat 179: Yellow knit acrylic cap with embroidered and appliqued minion face detail on front and Embroidery on back that reads: "Despicable Me on Blu-ray and DVD December 14, 2010."

This hat is loaned to the Project by Team Boucher (the family unit that's brought such memorable installments as Hat 128 and Hat 61) and I chose it as today's hat for two reasons.

First, it's a cheery shade of spirit-lifting yellow on a rare rainy L.A. day. Second, it's to commemorate the theft and assumed destruction of the hybrid dwarf Meyer lemon tree that, until sometime between sunset and sunrise, existed at the corner of the driveway in front of our home.

As I was headed out to my car this morning I first noticed a lone lemon sitting in the driveway (that's the one in my mouth above). My eyes went immediately to the lemon tree -- or, more accurately, the hole where it had been when I walked by it last night with a sense of urban citrus-farming pride that was growing as slowly and deliciously as the dozen tiny lemons hanging from its branches.

To me the ragged hole and protruding pieces of root make it seem like a random act of senseless fruit slaughter although it's possible that some down-on-their-luck person had decided to turn the lemons in their life into lemonade and needed a constant source of Citrus × meyeri with which to do so.

Whatever happened, I'm guessing the jackass who ripped the lemon tree out of my yard doesn't realize he made a 48-year-old man cry on the way to work this morning.

But no worries -- by the time I got to work I was already a minion miles beyond it.

OK, nice hat -- but what exactly is Project Cubbins, anyway?
A: One man's homage to Dr. Seuss and his second book, "The 500 Hats of Bartholemew Cubbins," which is celebrating the 75th anniversary of its publication in 2013, Project Cubbins is an attempt to document the wearing of a different hat or piece of headgear every day for 500 consecutive days. No do-aheads, no banking of hats, no retroactive entries. PC started on May 27, 2013 with Hat 1. Got hats? If you loan 'em, you'll get e'm back safe and sound!
Posted by Adam Tschorn at 9:05 AM