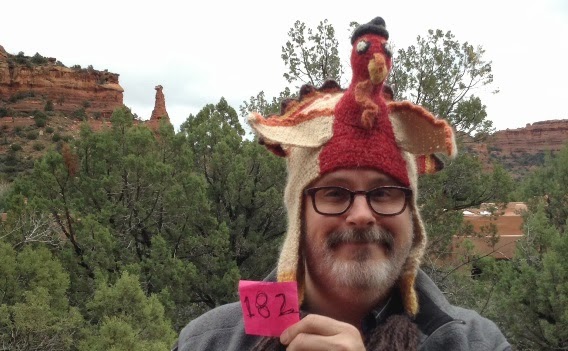 Day 182 / Hat 182: Peruvian-made turkey hat purchased for the Project today at a store in the Tlaquepaque Arts and Crafts Village in Sedona, Arizona.

When I asked the proprietress Debby the name of the establishment so I could remember it include it here, she responded: "Just Us Girls - all you need to do is remember JUGS!" To which I responded: "I always do!"

Additional note: The pointy rock formation in the upper left of the photo is called the Boynton Spire aka Kachina Woman. It is purportedly the locus of the only Sedona vortex that manifests both masculine and feminine energy -- if you're into the New Agey thing.

It also holds a special place in Native American lore. She is supposed to be carrying a cottonwood canoe on her head that was gift from her father Great Mystery (aka the Big Kahuna hisself). She is watching over all the two-leggeds to make sure we behave. According to legend, if the formation topples, Kachina Woman is sending a message that humanity needs, to put it mildly, a cosmic bitch slap.

Oh, one more thing: this place is full of juniper trees - and I think several of the trees behind me are what's called Utah Juniper trees. Apparently when the juniper berries freeze and then thaw (like they have here recently) they start to ferment and when the birds eat them they get kind of drunk.  Drunk Birds sounds like a great Angry Birds sequel to me.