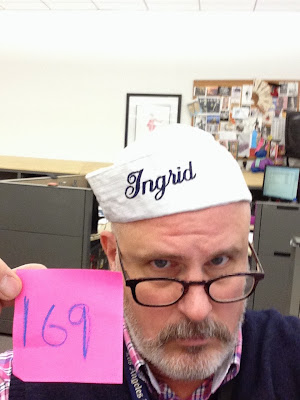 I thought long and hard about whether or not to include this hat (on loan from Ingrid in case that wasn't abundantly clear) since I wore a very similar hat for installment 101 -- In the Navy. I ultimately decided to include it for two reasons.

First, the rules I set for myself was no duplication of hats, and this is a totally different hat -- and no one needs to take my word for it since Ingrid's name is across the front of this one. And, since I've worn several different black knit caps to date -- all distinguishable due to a variety of different embroidered logos and the like, it wouldn't make sense not to sport this particularly worthy loaner.

Second, since it's Veterans Day today, I thought it would be an appropriate hat-related way to pay homage.

So today's tip of the hat goes to all the veterans of our armed forces. I thank you -- and salute you.

A: One man's homage to Dr. Seuss and his second book, "The 500 Hats of Bartholemew Cubbins," which is celebrating the 75th anniversary of its publication in 2013, Project Cubbins is an attempt to document the wearing of a different hat or piece of headgear every day for 500 consecutive days. No do-aheads, no banking of hats, no retroactive entries. PC started on May 27, 2013 with Hat 1.
Posted by Adam Tschorn at 10:48 AM